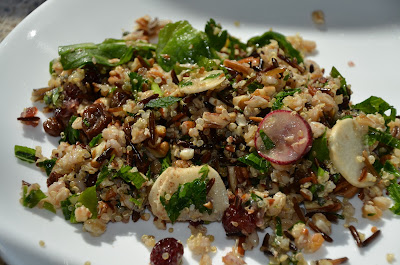 While normally I think of myself as an adventurous eater, there are some things, I still shy away from.  Beef tongue?  Pork trotter?  No problem.  Quinoa?  No, thanks.  Seriously.  I've been a flexitarian for years now (probably between 15 - 20 years of eating meat just a couple times a week, and sometimes less than that.  Of course, sometimes more, too).   I love tofu and have eaten it many different ways.  I love lentils and other beans.  However, I haven't branched out to the grains.  Too hippy, I've always thought (I know, I can hear you laughing at me now).  This recipe inspired me to buy no less than 3 grains I've never, ever bought before.  I will be buying those grains again.  I may even try some other quinoa recipes.

It was the radishes and arugula that inspired me to take the plunge into not typical US mainstream grains.  In our CSA box last week, we got two large bunches of different radishes.  My favorite were included---the red ones that when you slice you see pink rings in the middle.  I am not a radish fan.  I'll eat them in chicken tacos (aahh.....must make those again soon!), but that's about it.

Curtis and I loved this.  I didn't even offer it to our kids.  I figure once it's on the table a few more times, I'll have them taste it.  By then, they'll be used to seeing it and it won't seem so strange.  Plus, if I shared, then I wouldn't have any for lunch for myself today.  I also shared some with my in-laws and they thought it was pretty good.

I made a half recipe which easily served 4 - 6 people as a side.  The amounts included are my half recipe amounts.

Bring a large pot of heavily salted water to a boil.  If using wild rice and wheat berries, add those first and cook for 10 minutes.  Add whatever remaining grains you are using and cook an additional 25 minutes or until just tender.  Drain the grains in a fine colander (if your holes are too big, the quinoa will all escape with the hot water) and set aside until just warm to the touch.  Combine the grains with the rest of the ingredients in a medium-large serving bowl and toss well.  Season with salt to taste (if you heavily salted the water, you probably won't need to add any extra salt).
Posted by Melani at 10:54 AM 1 comment:

I am beginning to feel like a broken record.  It goes like this:  I found this great recipe in Melissa Clark's In the Kitchen with a Good Appetite.  I am not sure exactly how many of her recipes I've posted, but I am starting to feel guilty.  Just go buy the cookbook so I don't need to feel guilty. Ok? Ok.  Let's say I am posting this recipe for myself, not you, so when I get my box of produce and plan my menu for the week, the recipes are here on the blog, the first place I check when menu planning.

Really, that dog of ours couldn't find a better cookbook for me for Christmas present last year (yep, the cookbook is from our dog).  I hope she does as well this year.

It being summer and all, we've been getting our CSA box every other week.  It just works out better for us to do it that way in July, August, and September.  I can work through all the produce in a 2 week time easily, but in a week is a bit of a stretch.  I need to supplement vegetable based meals with a little more meat.  I found a pork loin in my freezer (I wonder how that got there.....), and then found the easiest, least apt to heat up the kitchen recipe I could find. 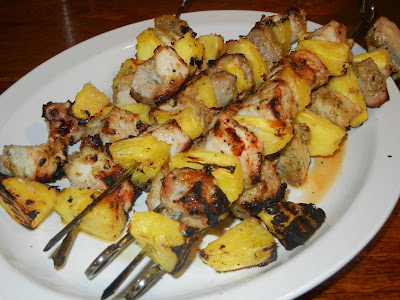 All but M loved this (but to be honest, she didn't like a single thing I cooked all week. Seriously).  This was super easy and can be mostly made ahead of time and just cooked at the last minute.  I served it with brown rice.

Season the pork chunks with salt and pepper.  Smear half of the cashew sauce over the pork to coat thoroughly.  Reserve remaining sauce as a serving/dipping sauce.  Let the pork marinate at room temperature while heating the grill or broiler or you can let the pork marinate in the refrigerator for up to 12 hours.  Alternately thread the pork and pineapple chunks onto metal skewers.  Grill or broil (I grill to avoid heating up the house) the skewers until the pork is cooked through, about 12 minutes, turning the skewers once halfway through.

Serve with rice, sprinkling pork with remaining cilantro and serving the remaining cashew sauce on the side. 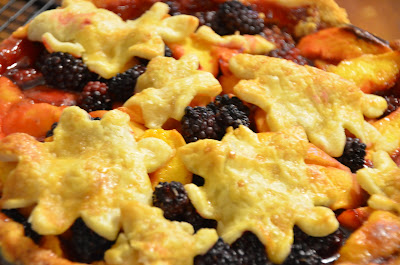 I used to claim my peach pie was the best I ever had.  In fact, I think the recipe may be called Best Peach Pie, I was so confident.    This year though, when I started to make The Pie, something seemed lacking.  It didn't have that WOW factor I thought it once I had.  I felt like it was undercooked.  I didn't like how hard the top of the pie was.  I searched for a new recipe.

It took me last than 10 minutes to decide to try a this recipe.  Since then, we've made it no fewer than 4 times this summer.  We loved it that much.  I made a few tweaks after the first time to get the crust not to get so dark, but other than that, it's been good to us.  Curtis tried his hand with it one day, thinking he could improve on it.  The only thing he thought that really improved it, was slicing the peaches more thinly and more carefully arranging them in the pie crust (instead of my dump and clean out with a spatula method).

Now I feel like once again I can claim my peach pie is the best I've ever had.  It's perfect this time.  Really.  At least until one or two or five summers from now when I decide it isn't.

This does take a chunk of time to make, mostly because the crust is so fussy.  It's a wonderfully rich butter crust, but it does have to chill twice and blind bake before filling it with fruit and baking it again.

For the crust:  Pulse together the flour and salt in a food processor.  Add the butter and very briefly pulse---just until butter breaks up into chickpea sized chunks.  Add the water, 1 T at a time and pulse just until the mixture holds together (you do not want the mixture forming a ball and spinning around the sides of the food processor bowl).  Form the dough into a two balls, set each on a piece of plastic wrap and flatten into a disk.  Firmly cover/seal the dough with the plastic wrap and chill in the refrigerator at least an hour before rolling out and baking.

If you've refrigerated the dough for significantly more than an hour let rest on the counter a minute or two before rolling out.  You can tell if you need to do this if the dough is too hard to roll and immediately breaks apart when you are rolling it.  On a lightly floured surface, roll out one ball of pie crust to fit a 9" pan (the dough should maybe be 13 - 14 inches in diameter).  Place in 9" pan and flute the edges.  Chill the dough for at least 30 minutes or as long as overnight.  With the second ball, roll out thinly and cut out 10 - 15 shapes using a cookie cutter.  I choose flower shapes---both big and small (mostly because I didn't want Christmas or Halloween themed shapes on my summer pie).  Transfer to a baking sheet lined with waxed paper and refrigerate until ready to use.

For the filling:
Combine the peaches in a large bowl with lemon juice.  Gently stir in the sugar, brown sugar, and salt, and allow to macerate (sit unattended) on the counter for 30 minutes.  While the peaches macerate, prebake the crust in a preheated 375 degrees oven.  Line the crust with foil and fill with pie weights.  Bake for 25 minutes or until the edges of the crust begin to crisp.  Remove the weights and foil and bake an additional 5 minutes to crisp the bottom of the crust.

Once the peaches have finished macerating (I just like using that word!), add the cornstarch and vanilla to the fruit and stir until the cornstarch dissolves.  Add the blackberries and very gently toss.  Scrape the fruit into the pre-baked pie shell.  Arrange the pie crust cutouts on the tope, touching at places but not totally covering it.  Brush the cutouts with the egg white glaze and sprinkle lightly with the coarse sugar.  Bake in a preheated 400 degrees oven (yes, this is higher than before) for 40 minutes.

Around 30 minutes into baking time, check the edges of the crust.  If it appears to be browning to quickly or getting to dark, very, very lightly tent a piece of foil over top.  After the initial 40 minutes of baking at 400 degrees, lower the oven temp to 350 and bake an additional 15 - 40 minutes, until the filling is bubbling.   You want to leave the pie in the oven as long as possible so the cornstarch activates and thickens the filling.  However, if you are concerned that the crust just won't taste good because it's so dark, take it out of the oven.  It will be more edible with a runny filling than with burnt crust.
Posted by Melani at 6:05 AM No comments: