Chard with Olives and Pine Nuts 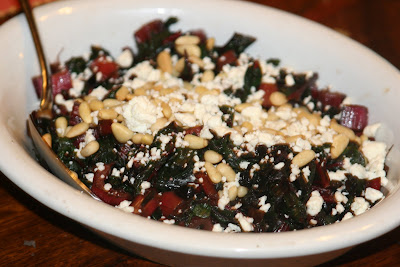 I got a new cookbook the other week. It's been quite a while since I've done that and when I saw table of cookbooks at Costco, I couldn't resist. I passed by Dorie Greenspan's Around My French Table (new French cookbook) and another one (I can't remember) that was also on my possible cookbook list for Mark Bittman's Food Matters Cookbook.

I have a love/hate relationship with Mark Bittman. I love everything he's passionate about--good foods that are good for you. He's big into vegetables (he's the "vegan-before-6" guy). He uses meat as seasonings often. I like that. I like his writing for the New York Time's and his food blog. However, I am convinced by his cookbooks, and in retrospect, I am a little surprised I bought this one. I have his How to Cook Everything and have had mixed results with his recipes. I often feel crucial information is missing from his recipes (like the size of pan to use, when size does matter).

This is the second recipe from his Food Matters Cookbook that I made. The first recipe was a bit of a major fail. I contemplated returning the cookbook after that (I don't often have major fails that are due to a faulty recipe. Usually I take full responsibility because generally, I have lost the ability to read and comprehend. In this case, it was the recipe at fault and not me). However, I decided to give another recipe a try because I like Bittman and his food philosophy.

Success!! Both Curtis and I enjoyed this dish. I am pleased to have found a way to cook chard in a side dish that is easy and quick. The kids didn't like it, but I didn't expect them too, so nothing was lost.

Cut leaves from stems of chard. Cut the leaves into wide ribbons and slice the stems about 1/4 - 1/2" thick. Keep the leaves and stems separate.

Put the oil in a large skillet over medium-low heat. Heat for 1 minute. Add the garlic and cook, stirring until soft, golden, and fragrant, 5 - 10 minutes. Turn the heat up to medium and add the chard stems and black olives. Cook until the stems begin to soften, just a minute or 2. Add the chard leaves, water, and a little salt and pepper. Raise the heat to medium-high and cook, stirring until chard leaves are wilted and most of the liquid has evaporated, about 5 minutes. While the chard cooks, toast the pine nuts in small pan over medium-low heat, until they are fragrant and golden. Stir the pine nuts into the cooked chard. Adjust seasonings as necessary. Sprinkle with a little feta and serve, hot or at room temperature
Posted by Melani at 11:18 AM

Oh man, is this good. This is my ultimate easy chard recipe from here on out. So savory and delicious.