Pasta with Chard and Dried Fruit 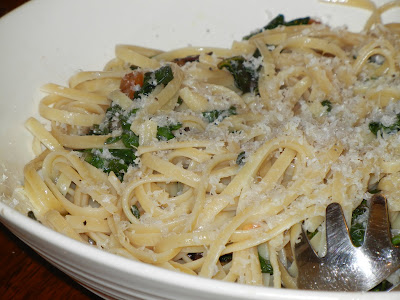 I had planned on making a heavier dish with my chard this week. However, when Sunday evening rolled around, I was wanting something lighter after a weekend of eating cheese and dairy filled meals. I still wanted to use the chard and I thought pasta would be good, too. So, I searched. I thankfully didn't have to search long before I found this recipe.
The kids didn't love this. I think if M would have been hungrier, she would have eaten more. J ate it pretty well, but little I didn't eat much. We are still working on eating green leafy things consistently. Curtis and I really enjoyed it.
I didn't end up having enough chard, so I used a combination of spinach and chard. That worked just fine--I couldn't really tell the difference between the two in the dish.
This serves 4 - 6.
Pasta with Chard and Dried Fruit
adapted from Food and Wine
3 T pine nuts, toasted
5 T olive oil
1 clove garlic, minced
2 bunches chard, large stems removed and leaves chopped into 2" pieces (or spinach or a combo)
1 1/2 t salt
3/4 t black pepper
1/4 c sliced dried apricots
1/4 c raisins
1/4 c red wine (optional, you can also use water)
small pinch of cinnamon
3/4 lb long pasta, such as fettuccine or linguine
1/4 c grated Parmesan
Bring a large pot of salted water to a boil. Cook the pasta until done. While the water heats for the pasta, put the oil in a large pan over medium heat. Add the garlic and cook for 30 seconds, or until fragrant and golden. Add the chard and a 1/2 t of salt and pepper. Cook until the chard is wilted. Add the dried fruit, wine, and cinnamon. Simmer until the mixture is almost dry. Remove from heat.
Drain the pasta when it is al dente. Toss it with the chard. If the pasta looks a little dry, drizzle some extra virgin olive oil over top. Sprinkle with pine nuts and parmesan and season with remaining salt and pepper.
Posted by Melani at 8:02 AM