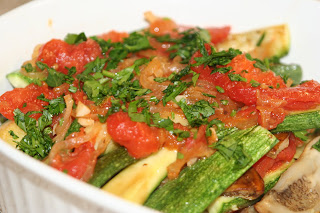 I think for every cook inundated with eggplant and zucchini there is a unique ratatouille recipe. I decided to give Julia Child's recipe a try, but with a few changes. I cut the recipe in half because I knew it would just be Curtis and I eating it. I also had to finish it in the oven instead of the stove because I had no casserole dishes that can also go stove top (oooh....now for my Christmas a Le Crueset enameled cast iron casserole dish).

As I admitted before, I am on the Julia Child bandwagon. I am learning some different cooking techniques and finding some good recipes. Does this mean I am straying away from the whole local thing? Absolutely not. In my opinion, most other ethnic (as in other than "American"-- French being ethnic as well) recipes do a much better job of incorporating local, in season ingredients than we do. To quote Julia Child in Mastering the Art of French Cooking "Any fine, fresh vegetable in season will taste just as good in America or anywhere else if the French vegetable-cooking techniques are used." (bold is my emphasis). She, like most chefs and good cooks, recognized seasonal, local vegetables (and fruit) make the best tasting food. My Julia Child bandwagon is just a way of increasing my collection of recipes and the repertoire of skills.

As far as the results (the picture is the before cooking picture). Curtis and I loved it. It had the seemingly silly technique of patting each piece of sliced vegetable dry before frying, but from what I understand, that step is what allows any cooked food (meat, vegetable, whatever) to brown. So, I did it and the vegetables looked beautiful. I think I like almost any ratatouille...it's just a great side dish. I am listing the proportions for a full recipe.

Ratatouille
adapted from Mastering the Art of French Cooking

Place eggplant and zucchini a bowl and toss with 1 t salt. Let stand for 30 minutes (to drain the liquid from the vegetables). Drain and dry each slice with a towel. One layer at a time, saute the eggplant and then zucchini in hot olive oil (4 T) for about a minute on each side to brown lightly. Remove to side dish. Cook the onions and peppers slowly in the olive oil from about 10 minutes or until tender, but not browned. Stir in the garlic and season with salt and pepper to taste. Slice the tomatoes into 3/8" strips. Lay them over the onions and peppers. Season with salt and pepper. Cover and cook over low heat for 5 minutes or until tomatoes have released their juices. Uncover, baste the tomatoes with the juices, raise the heat, and boil for several minutes, until the juice has almost entirely evaporated.

Place 1/3 of the tomato mixture in the bottom of casserole dish (2 1/2 quart) and sprinkle over it 1 T parsley. Arrange 1/2 the eggplant and zucchini on top, then the half the remaining tomatoes and parsley. Put in the rest of the eggplant and zucchini, and finish with the remaining tomatoes and parsley. Cover the casserole and bake in a preheated 350 degrees oven for 10 minutes. Uncover, raise heat to 375 degrees and cook, uncovered, for 15 - 30 minutes, until juices have mostly evaporated. Serve hot or set aside and reheat (or even serve cold) slowly just before serving.

**To deal with tomatoes, drop in boiling water for 10 or so seconds, remove, and the skin will slip right off. Cut the tomato in half when it is cool enough to handle and gently squeeze out the seeds (and some juice as well). The process is much easier than it initially sounds.
Posted by Melani at 9:10 PM