This dish brought on a debate about food between Curtis and I. Curtis was sure moussaka had mashed potatoes. I thought very otherwise. I looked up moussaka on wikipedia and learned all sorts of interesting things about moussaka (it traditionally doesn't have any sort of potatoes) and Greek cuisine (such as the name of the Father of Greek chefs whose name is now synonymous with cookbook). Authentic moussaka would contain lamb instead of beef, but I have a quarter cow in my freezer, so beef it is!

We all loved this. I was worried about what it was going to taste like because I was cooking under much duress--two children crying at all times (which two alternated) or screaming at each other as loud as they could (this is why I have no process pictures.....ever). By the time we sat down and ate, finally, we all gobbled up the meal. I halved it because the recipe serves 12, but splitting 3 eggs in half is always a little tricky (I used 1 egg plus 1 egg yolk). I also used a 6 oz can of tomato paste plus 1/2 c of water instead of the tomato sauce (I didn't think I had any sauce). Another great way to eat eggplant. 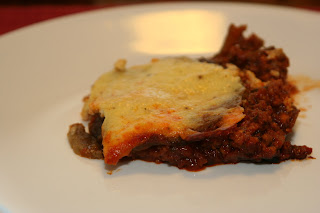 1 lg eggplant (about 1 1/2 lbs), peeled and sliced into thin rounds

I made this for dinner tonight and it was very good! Thanks again Mel for sharing all your wonderfulness with the world. I love this blog.